my best bollywood movie ever 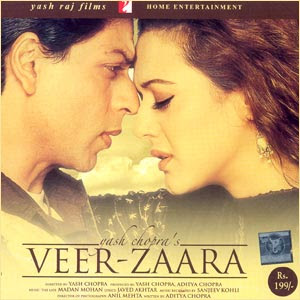 The movie Veer Zaara was released in year 2004. The film was directed by Yash Chopra and produced by Aditya Chopra and Yash Chopra.

The music director of Veer Zaara was Madan Mohan and Sanjeev Kohli and the songs of this film were sung by various playback singers like Lata Mangeshkar & Roop Kumar Rathod, Udit Narayan, Ahmed Hussain & Mohd. Hussain.
The songs of Movie Veer Zaara are as follows:


Review from The New York Times
To appreciate the Bollywood tear-jerker "Veer-Zaara,'' you have to accept the possibility that a morose prisoner who has not said a word in 22 years would, upon meeting a beautiful young lawyer who calls him by his name rather than his number, not just break his silence but also immediately pour forth more than three hours worth of his story.

If "Veer-Zaara'' were an American television movie, it would be embraced as fabulously trashy. For its home audience in India, this romance (with the requisite splashy musical numbers) is a Romeo and Juliet story about partition and tolerance; the heroine is Pakistani and the hero Indian. It is also a teaming of three of India's biggest movie stars, guided by the 72-year-old Pakistani-born Indian director Yash Chopra.

The love story, a long flashback, begins in Lahore, Pakistan, with our perky rich-girl ingénue, Zaara Hayat Khan (Preity Zinta), singing and dancing around the house like Ann-Margret in "Bye Bye Birdie" about how she is never going to change her style for anybody. She is about to get engaged to a man chosen by her prominent, politically ambitious father, but she'll think about that later.

Meanwhile, our salt-of-the-earth hero, Veer Pratap Singh (Shah Rukh Khan), a handsome helicopter pilot with the Indian Air Force, is busy rescuing people stranded in the mountains. The two might never have met if Zaara's Sikh nanny had not died, exacting a promise that her ashes be immersed in her native India. When Zaara's bus crashes on her way to keep that promise, she is among the passengers Veer rescues. After an initial misunderstanding, he joins her on her sentimental mission and takes her home to meet the family (conveniently, it's a holiday).
Amitabh Bachchan is charm personified in a special appearance as the uncle who brought up Veer. In the course of one day, Veer and Zaara fall in intense, irrevocable, karmic-destiny-transcending love, although Zaara doesn't fully realize it until her hideous fiancé meets her at the train station. After that, the gods test the young lovers, things get ridiculously melodramatic, and people behave so nobly that moviegoers may want to scream.

For once, that thundering soap-opera music (which makes a Douglas Sirk movie score seem subtle) is welcome; it drowns out any embarrassing audience sniffles.
When Veer finishes telling his story, his novice lawyer, Saamiya Siddiqui (Rani Mukherjee, the film's third megastar), vows to prove his innocence, and the movie turns into a courtroom drama. During a recess, Saamiya goes off on a Perry Mason-style evidence-collecting trip, which yields a highly satisfying surprise ending.

Seasoned Bollywood fans will be in heaven, so to speak. Other American moviegoers, who find the Indian film industry's tastes a little over the top, may not be able to get past cinematic devices that seem shamefully obvious, but over-the-top is part of the fun. In Bollywood, a single musical number can move through a dozen different settings with as many glamorous wardrobe changes. It also seems to rain a lot during musical numbers (some strange Gene Kelly influence?). When Saamiya asks of the star-crossed lovers, "What century are these people from?'' she means it as a compliment. Yet the cultural assumptions of Veer and Zaara add a welcome element of freshness for American audiences. When Zaara's mother reminds her daughter that women always love fully, with heart and soul, she casually adds, "Men don't have the strength to love like that.''
'Veer-Zaara'

Email ThisBlogThis!Share to TwitterShare to FacebookShare to Pinterest
Labels: my cinemas